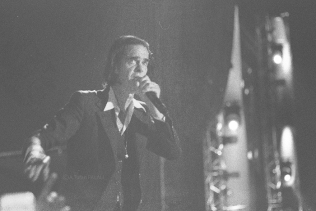 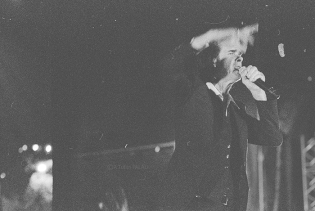 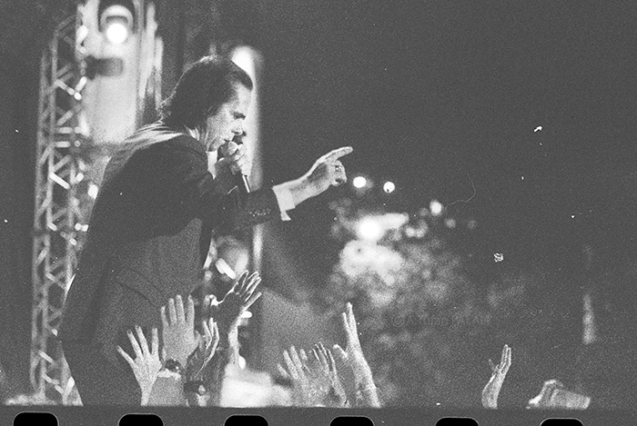 The show started in Küçükçiftlik Park which looks like the next destination to be swallowed when looked at the wild zoning spread of it which I’ll miss anyways in its deficient, roguish but sincere area with the sweet and enthusiastic crowd. Whereas Cave was closing the beginning part which was made up by mournings for his dead son Arthur, I cried for the loss that once shined like a ‘Star (Yıldız A.)’ with the melodies mixed with atmosphere of Istanbul that is full of memories. There was a setlist announced of Cave but he shaped his show with the reaction he got there… While Cave was performing his masterpieces one by one; ‘Do You Love Me, Into My Arms, The Ship Song” were the ones that were companied by the crowd the most.

Increasing tension of emotions got mixed with Istanbul with ‘Tupelo’ hurricane. (11th track)

Cave was saying, “In the story of a girl named Bee in Jubile Street who had no past; what matters is that she had a small black notebook.”..
“On Jubilee street there was a girl named Bee
She had a history, but no past
…
The problem was she had a little black book “
He was calling out to the girl who “seemed like his innocence” in Trier’s Dogville in his lyrics, Cave: “Go son, go and see! The women, the men and the entire humanity who cry tears…”
“Go son, go down to the water
And see the women weeping there
Then go up into the mountains
The men, they are weeping too. “
(12th and 13th tracks)

Cave sang Weeping Song as he intervened to the crowd. Then Küçükçiftlik Park was shaken with “Stagger Lee” as if intimating the anger of the innocent.
Stagger Lee: He said “Mr Motherfucker, you know who I am”
The barkeeper said, “No, and I don’t give a good goddamn”
To Stagger Lee: He said, “Well bartender, it’s plain to see I’m that bad motherfucker called Stagger Lee” Mr. Stagger Lee
Barkeep said, “Yeah, I’ve heard your name down the way and I kick motherfucking asses like you every day”
Mr Stagger Lee
Well those were the last words that the barkeep said
‘Cause Stag put four holes in his motherfucking head
(14th track)

As how anything subjected to the time becomes invisible sooner or later; the show ended as leaving “cute liar happinesses” behind… In these gloomy years that music masters don’t come to Istanbul as used to, I had tone of the fifteenth song in my ears while leaving the magnificent show that saved the year: “PUSH THE SKY AWAY..  KEEP ON PUSHING, KEEP ON PUSHING, PUSH THE SKY AWAY…”
Note 1: This probably was the last time seeing Cave in Istanbul where he came again after 14 years.
Note 2: That Cave accepted the tshirt printed “Cave” gratefully by a fan who took it off from himself was the touchiest moment of the night.
Note 3: Cave who was strangling him was going to knock out one audience who jumped to the stage inappropriately if he wasn’t convinced :)
Note 4: Unlike the musicians here who have obsessions like no pictures, the musician Cave didn’t care; he just focused on his performance…
Note 5: Setlist of the show and some videos I recorded in the show:
1-jesus alone
2-magneto